Wall Street tumbled on Monday as investors remained concerned about the rising risks in the financial market. The Dow Jones fell by more than 800 points while the Nasdaq 100 index fell by more than 400 points. The decline happened as the Evergrande contagion risk remained while the deadline to hike the debt ceiling nears. Also, there are concerns that the Federal Reserve will sound hawkish in its upcoming monetary policy meeting. The bank is expected to provide hints about tapering since the economy is relatively strong. Some of the biggest laggards in Wall Street were firms like Blackstone, Deutsche Bank, Apollo Global, and Nio.

The US dollar rose in the overnight session as investors rushed to safe havens. The fear and greed index declined to 30 while the CBOE volatility index rose by more than 25%. The decline happened ahead of the latest US housing statistics data. Economists polled by Reuters expect data to show that the country’s building permits declined in August while housing starts rose in the same period. Still, the housing sector remains resilient as low-interest rates push people to buy homes. There is also the challenge of low supply.

The euro declined rebounded as the risk-off sentiment resumed in the market. The currency fell as investors reacted to the rising gas crisis in Europe. Gas prices rose by more than 20% after Russia made plans to reduce inflows in Europe. As a result, according to the Financial Times, European governments are considering spending billions of dollars to aid families and companies. Italy will likely be the first country to supply about 4.5 billion euros to address rising costs. France has also unveiled about 100 euros for poor families while the EU will meet to deliberate on more support.

The EURUSD rose from yesterday’s low of 1.1700 to 1.1730. On the two-hour chart, the pair is between the lower and middle lines of the Bollinger Bands. It is also below the 25-day moving averages while the Relative Strength Index (RSI) has moved slightly above the oversold level of 30. The pair is also slightly above the dots of the Parabolic SAR. Therefore, the pair will likely resume the downward trend today as investors wait for the Fed decision. 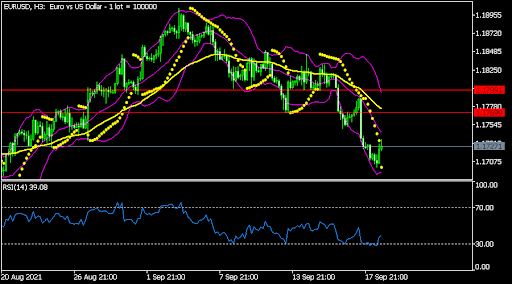 The GBPUSD pair declined sharply as the gas crisis continued. It fell to a low of 1.3637, which was the lowest level since August 24. On the four-hour chart, the pair remains below the short and longer-term moving averages while the MACD and Relative Strength Index (RSI) have also maintained a bearish trend. Therefore, there is a likelihood that the pair will stage a relief rally as traders rush to buy the dips. 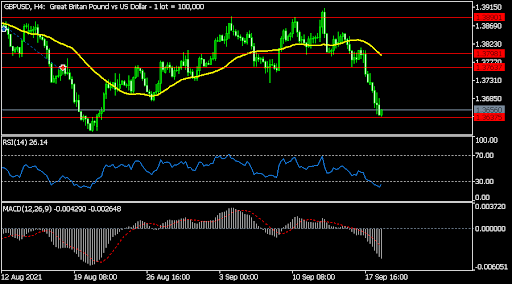 The S&P 500 index declined sharply in the overnight session. It fell to a low of $4,330, which was substantially below this year’s high of $4,550. On the four-hour chart, the index has tumbled below the 25-day and 50-day moving averages. It also moved below the key support level at $4,350 while the Relative Strength Index (RSI) declined to an oversold level. This sell-off will likely continue today even though a relief rally is also possible. 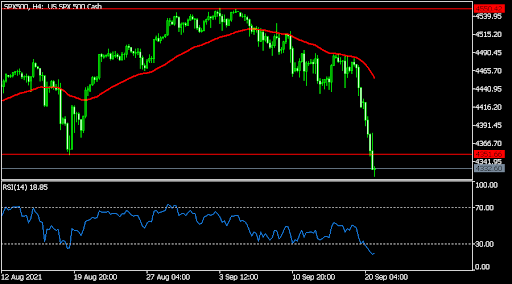