How long is transitory inflation – or is it about to get out of control? The persistent rise in consumer prices is troubling Americans and is expected to hold up – the Core Consumer Price Index is set to remain at 4%. That is stubbornly high. Any change could rock the dollar.

Supply chain issues, labor shortages and the grand reopening have sent inflation to the highest levels in a decade and prompted the Federal Reserve to taper down its $120 billion/month bond-buying scheme. When the Fed ends purchases, it is set to begin raising interest rates, thus boosting the dollar’s attractiveness.

Fed Chair Jerome Powell announced a tapering of $15 billion per month and left the door open to changing the pace, potentially accelerating the process. The Nonfarm Payrolls report showed an impressive increase of 531,000 jobs and also an acceleration in wage growth to 4.9% YoY. That also implies higher prices – and now comes the CPI report for October.

Time to get out of range?

Core CPI, which represents inflation excluding volatile food and energy, is the figure that matters to the Fed and markets. It stood at 4% YoY in the past two months, in remarkable stability. However, this could change now. It is essential to note that current levels are roughly double what was seen before the pandemic. 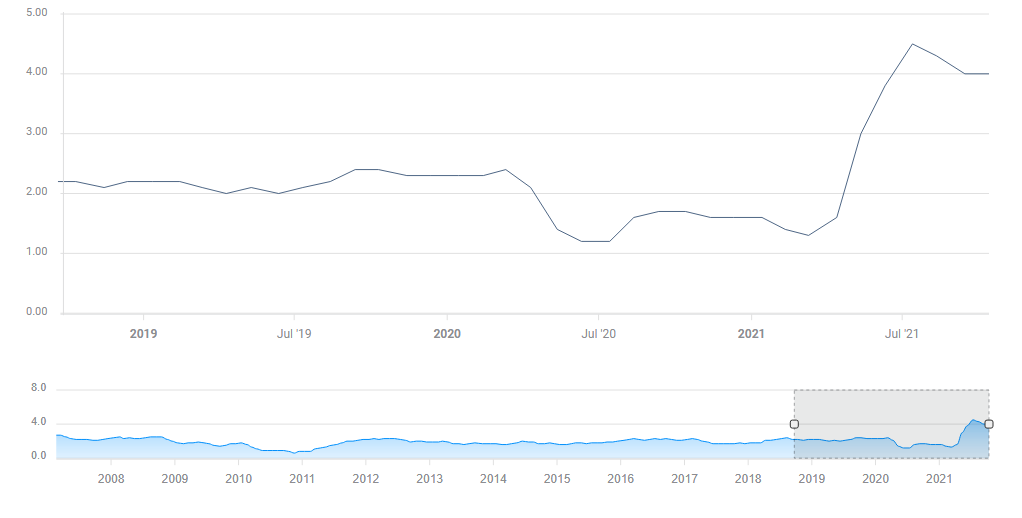 The dollar enjoyed a tailwind last week after the Fed announced tapering and the European Central Bank insisted it would not raise rates in 2022. Since then, that dollar bias has disappeared, as 10-year bond yields drifted lower. Another factor weighing on the greenback is the upbeat market mood, which diminishes demand for the safe-haven greenback.

At this juncture, the market calm balances out the dollar and the euro in the short-term, allowing an equal opportunity for movements in both directions.

Markets await a repeat of 4% YoY and 0.3% MoM on Core CPI. The yearly figure matters more and every change can make a difference.

October’s inflation figures are critical for the prospects of interest rates and the next dollar moves. There is no bias and every small change could rock markets.