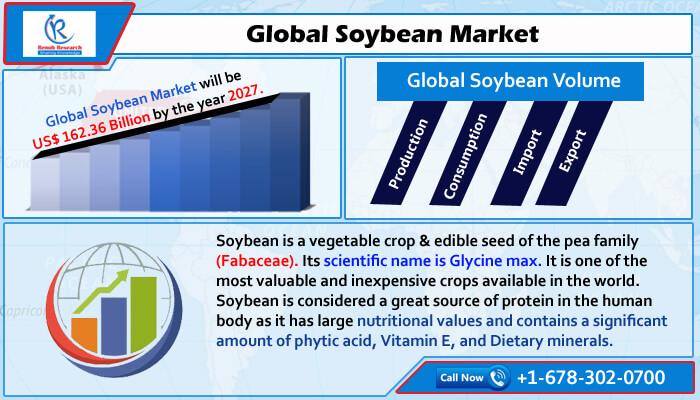 According to the latest report by Renub Research, titled “Soybean Market & Volume Global Forecast by Consumption, Production, Import, Export Countries, Company Analysis” the Soybean Market will be US$ 162.36 Billion by 2027. Soybean was initially cultivated in China more than 3000 years ago has become a global commodity, with numerous countries directly taking part as importers, exporters or both to international trade flows. Moreover, the industrial and agrarian revolution of the 18th century has reshaped the traditional geography of soybean diffusion, production and consumption worldwide and inflamed another fundamental shift for this crop.
Worldwide Soybean Industry was US$ 127.81 Billion in the year 2020

Additionally, by the 20th Century, soybean had transformed into a versatile and globally necessitated cash crop, with a new production hub based in the USA from a food staple conventionally planted and consumed in Eastern Asia and China for thousands of years. More on this, soybeans are among the few complete protein vegetable-based foods with nine essential amino acids namely histidine, leucine, isoleucine, lysine, methionine, phenylalanine, threonine, tryptophan, and valine. For this reason, the soybean has become a crucial source of human and animal protein worldwide, with the majority of its cultivation destined for animal feed and the remaining destined for direct human consumption.

Request a Free Sample Copy of the Report: https://www.renub.com/request-sample-page.php?gturl=soybean-market-p.php

Soybean Production grew significantly due to Rise in Global Population

The rapid expansion of soybean in Brazil, which can also be seen as the result of technological and genetic improvement, gradually perfecting the adaptation of a temperate crop to the tropical climate, has been linked with deforestation, loss of biodiversity and reduction of other natural ecosystems. Thus, leading to increased efforts in production and sourcing soybean crops more sustainably. In fact, in the United States, soybean cultivation is projected to overtake wheat and corn as the crop covering the most significant farming land, spurred by the elevated demand for animal feed and the enlargement of soybean exports to China world’s largest soybean importer.

Soybeans, also known as the “king of beans”, are crushed chiefly into soy oil and meal. Besides, soybean is detected in hundreds of edible and non-edible products, from cooking oil, vegan food, animal grains and milk to biodiesel and other industrial applications. Soybean oil is the most preoccupied cooking oil in the global realm after palm oil. Furthermore, the adaptability of soybeans will be a significant factor in maintaining demand growth, as the soybean market can be utilised into animal feed, food and beverage, personal care, dietary supplements, pharmaceuticals, and biomaterials biofuels.

Today, the leading soybean trade routes converge over the Pacific Ocean, shaping a triangle between China, Brazil and the United States of America. This picture reveals a complex ‘geopolitics’ of soybean trade flows, where a myriad of small actors – several countries, each with their interest – coexist in the international arena alongside the major players, which are embodied by the USA-China-Brazil triarchy. Contrarily, the historical production centre for this crop, China, is the primary consumer. Its growing demand for soybean is mainly fed by the Americas, with Brazil.

In addition, the exceptional growth in the global soybean production levels mirrors, of course, the consumption patterns for this crop. As per our analysis, domestic soybean consumption data shows that the five largest consumers – namely China, United States, Brazil, Argentina, and European Union– consumed about 80.86% of the soybean globally produced in 2020.

The current geography of soybean international trade flows is massively concentrated around two ‘magnetic’ poles. On the one hand, the Americas represent the export (and production) pole, with most soybeans traded internationally originating from Brazil, United States and Argentina. On the other hand, the import (and consumption) pole is situated in Asia – which attracted as a continent, with China playing the lion’s share. China’s soybean production has had a little hike in the forecasted period. At the same time, its consumption levels increased spontaneously in the same period, allowing foreign exporter countries to close this gap.

Remarkable of the prominent players in the industry, such as companies like Kerry Inc, Fuji Oil Group, House Foods Group Inc, CHS Inc, Cargill Inc and Archer-Daniels-Midland Co-existing globally, are increasingly selling soybeans as plant-based meat substitutes to respond to consumer demand prevailing in the market.

Follow the link for the full report with detailed TOC and list of figures and tables: https://www.renub.com/soybean-market-p.php

The Influence of COVID-19 on the Soybean Food Supply Chain:

Even with high COVID cases in the major producing countries, the soybean industry continues to operate, with farmers in the United States, Argentina, and Brazil crushing record amounts of soybeans. However, logistical bottlenecks had narrowed the crushing, transport, and export of the crop and farmers in these countries, particularly in Argentina, are recognising stockpiling their production to sell it later for meanwhile market conditions recover, given the impact of the lockdowns and reduced crop demand.

Nevertheless, demand for soybeans is projected to continue growing in the coming years due to various determinants. The intake of meat and soy-based health products is rising, while population figures are slated to expand, and policy-makers are more supportive of biodiesel as a fuel alternative. Specifically, soybean consumption is expected to grow, particularly among the growing middle class in emerging economies, increasing global plant-based meat consumption.

Renub Research is a Market Research and Consulting Company. We have more than 10 years of experience especially in international Business-to-Business Researches, Surveys and Consulting. We provide a wide range of business research solutions that helps companies in making better business decisions. We partner with clients in all sectors and regions to identify their highest-value opportunities, address their most critical challenges, and transform their businesses. Our wide clientele comprises major players in Healthcare, Travel and Tourism, Food & Beverages, Power & Energy, Information Technology, Telecom & Internet, Chemical, Logistics & Automotive, Consumer Goods & Retail, Building, and Construction, & Agriculture. Our core team is comprised of experienced people holding graduate, postgraduate, and Ph.D. degrees in Finance, Marketing, Human Resource, Bio-Technology, Medicine, Information Technology, Environmental Science, and many more. Our research helps to make business decisions: on strategy, organization, operations, technology, mergers & acquisitions etc. We support many blue chip companies by providing them with findings and perspectives across a wide range of markets. Our research reports offer a blend of information insight, analysis, and forecasting that is essential in today’s ultra-competitive markets.

According to the latest report by Renub Research, Global Soybean Market is Forecasted to be more than US$ 162.36 Billion by the end of year 2027.

This release was published on openPR.