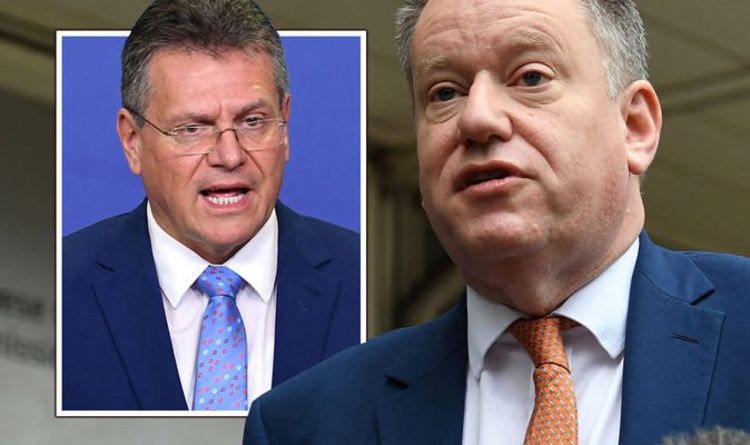 After meeting with European Commission Vice President Marcos Sefcovic in Brussels, the Brexit minister said there two sides had once again failed to reach an agreement.

While he said some progress had been made, he warned triggering Article 16 may still be necessary in order to protect the integrity of the UK.

He said: “Following the meeting last week, intensive and constructive talks have proceeded between the UK and EU teams.

“There is the potential to generate some momentum in our discussions.

“In this context, I welcome the Vice President’s acknowledgement in his speech this morning that the Protocol had led to unintended consequences in Northern Ireland.

“Addressing these continues to be the urgent task before us.”

For months the UK has warned the Protocol is having a damaging impact on the Good Friday Agreement and the peace process in Northern Ireland.

Ministers and officials have been left frustrated by the repeated refusal of the EU to admit to frictions caused by the Protocol’s implementation.

But this morning, giving a speech at the Brexit Institute at Dublin City University, Ms Sefcovic said he wanted to find a “comprehensive long-term solution” and create a “win-win situation” that would help the people of Northern Ireland.

Setting out his plans, he said he wanted to create an “express line” for goods set to remain in the province with little likelihood of entering the EU via the Republic of Ireland.

He said: “These measures would create a type of express line, which would substantially facilitate trade between all parties, a win-win situation for all.

“It is a unique and completely new model for how goods can be moved from Great Britain to Northern Ireland, one that will strengthen opportunities for people and businesses alike.”

He added: “It will make the application of the protocol more transparent while at the same time respecting the UK’s constitutional order.”