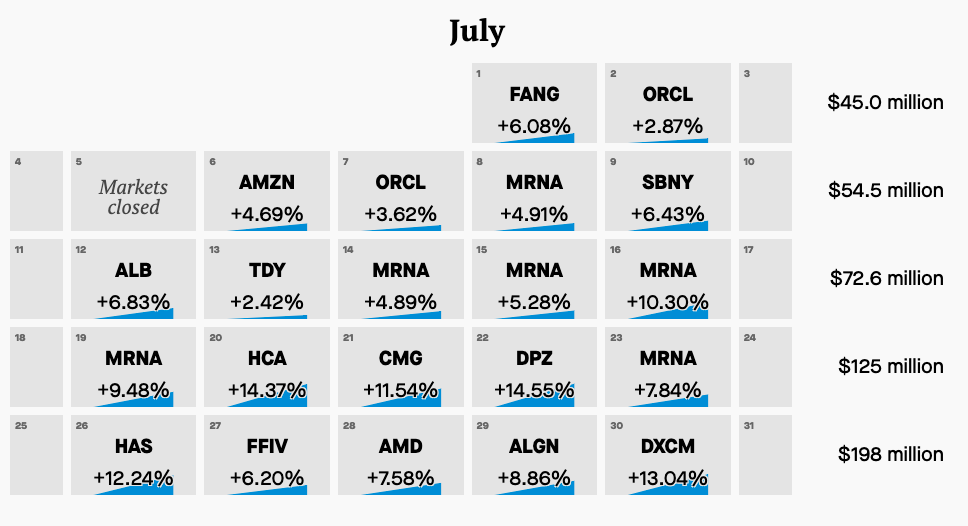 If you had $1,000 and knew exactly the right stock to trade every day, how much money could you make in a year? In 2021, trillions.

A trader who began 2021 with $1,000 in a brokerage account and put all of the money in the best-performing S&P 500 company each day of 2021 would have $1.3 trillion in that account today—and hold claim to completing an effectively impossible task.

By March 8, they would have reached $85,163, exceeding the US household median annual income. Buying shares of Equifax on April 22 would have brought total gains to over $1 million. A month later the balance would hit $5 million with a trade in Enphase Energy.

The trader would be a billionaire on Aug. 27, after riding Occidental Petroleum through a 6.9% one-day gain. They’d reach $10 billion on Oct. 18 and $100 billion on Nov. 16. They would have eclipsed Elon Musk as the richest person in the world after hitting $285 billion on Dec. 2 (Musk was worth a mere $284 billion on that day, according to Bloomberg). Over the course of the year, the trader would not have taken a loss on any single day.

Here’s a day-by-day calendar of the S&P 500 stock they would have had to invest 100% of their portfolio in to pull off the perfect trading year.

Although the S&P 500 index has 500 members, only 137 companies were the top performers on any of the 252 trading days in 2021. The most frequent top performers were Moderna, Tesla, and oil driller APA:

Of course, once the account balance had grown past a certain point, it would be impossible to put it into any stock without drastically affecting the stock’s price. In many cases, putting it all into the best-performing company on a given day would have been impossible—there wouldn’t have been enough shares to buy.

Our analysis also did not take into account trading fees, nor changes in the composition of the S&P index through the year. As in prior years, we assumed that all companies allowed for investment in fractional shares.

Moreover, even if one made the impossibly optimistic assumption that picking the best stock of the day is a 50-50 guess, there would be a one in 7.24 quattuorvigintillion (7.24 × 1075) chance of matching these results.