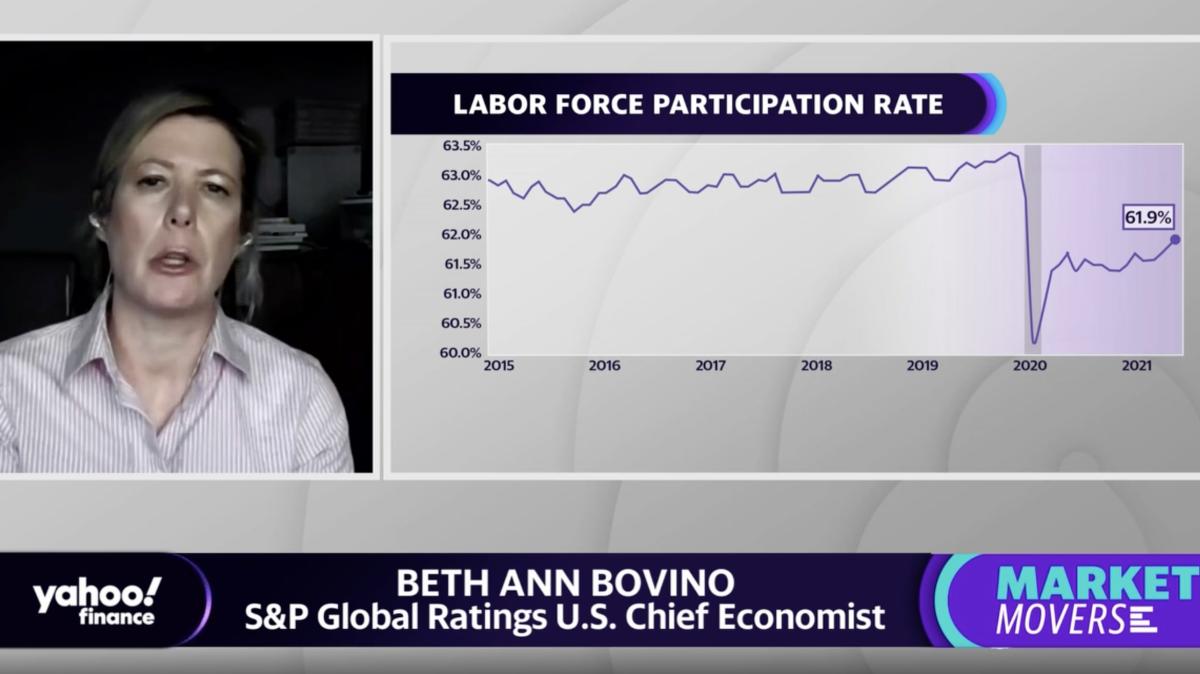 ALEXIS CHRISTOFORIOUS: The stock market has a pretty tough act to follow here in the new year. Despite a global pandemic and the highest inflation in 40 years, the S&P 500 rallied 26% in 2021. That’s on top of a 17% gain the prior year.

So what does this new year have in store for investors. So far, we know it’s off to a pretty rocky start. Well over the next hour, we’ll be speaking with some of the brightest minds on Wall Street to get their perspective on the markets and where they see opportunity for you in the new year.

We’re going to kick things off with Beth Ann Bovino, Chief US Economist at S&P Global. Beth Ann great to see you, and happy new year. You know, if the past two years have taught us anything, I think it’s taught us just how resilient Americans can be. So I’m curious how optimistic you are about the US economy in 2022.

BETH ANN BOVINO: Funny you should say that. I see it as we’re certainly seeing a slowdown in growth from the likely 37-year high. But again, we’re looking at growth at just under 4%, which is twice what would be considered potential or trend growth for the US. So we see it more as growing pains.

We think households are in pretty good shape. Indeed, we’re looking at– We’re looking at a job market that is incredibly tight with wages climbing higher. Inflation is certainly going to pinch people’s pocketbooks, but they are still sitting on a lot of savings because of, basically, stimulus from last year, as well as that strong– those strong wages that are coming to them.

ALEXIS CHRISTOFORIOUS: So what do you expect economic growth to be this year? What’s your forecast?

BETH ANN BOVINO: We’re looking at economic growth to come– to slow down to around just under 4%. That is, I guess I mentioned, about twice what would be considered potential or long-term growth rate. Really good numbers. We’re looking at– we’re certainly expecting to see a slowdown in housing, helped by the Fed actually ratcheting up interest rate hikes going forward.

And we do see– and we do see households slowly being a little bit more circumspect on purchasing as– because they– after their– kind of, their– I guess, recovery high last year. So we do think them slowing down, but we don’t think that they’re going to shut down their pocketbooks completely.

ALEXIS CHRISTOFORIOUS: So Beth Ann, you mentioned a tight labor market, kind of an understatement here heading into the new year. We’ve got the unemployment rate at 3.9% for December. Pre-pandemic, let’s remember, it was 3 1/2 %, yet we still have people quitting their jobs at a record rate. How much is the labor shortage going to be an issue for these supply chain constraints, but also for corporate America for profit margins as companies are going to be forced to continue to raise those wages?

BETH ANN BOVINO: Well, we thought– we thought that many of those people who– we don’t think– we had earlier said that we didn’t think it was tied to unemployment benefits. We saw that the real story was basically labor market exit. And when you look at the numbers today, based on the most– on the jobs report that just came out, what it was that well over half, I guess almost about 70%, were largely because of labor exit.

And the big factor there is prime age workers. Why are they leaving? We think a lot of it’s tied to the virus, and now that we have Omicron, it’s just going to mean that it’s extended, the problem is still there. We think it probably won’t start to soften until sometime later this year, probably in the second half of the year. That means businesses are still going to be squeezed.

ALEXIS CHRISTOFORIOUS: So the Fed, we know, is poised to sort of end our country’s love affair with easy monetary policy. We’re expecting those rate hikes. They telegraphed it could come as early as March. Goldman Sachs, today, out with a prediction, four rate hikes in 2022 where do you stand?

BETH ANN BOVINO: We’re looking at– we see the Fed, certainly it’s not that they walked back their so-called transitory statement on inflation. They ran it back. It looks like– we suspect there’s going to be three hikes from the Fed, the first one in May.

I wouldn’t be surprised if they moved it forward, largely because we do have the midterm elections, and usually the Fed doesn’t like to raise rates right around that time. Don’t want to see that they’re interfering with politics. However, we don’t think they can stop. As you mentioned with inflation at, I believe it’s at close to a 40-year high for one indicator. It means that they can’t stop.

ALEXIS CHRISTOFORIOUS: So pick your poison, right? You’ve got high inflation. You’ve got interest rates probably headed higher, labor shortages, supply chain constraints. To your mind, Beth Ann, what is the biggest threat to the economy and therefore to the stock market in 2022, even though we know those are two different animals? But what’s the biggest threat?

BETH ANN BOVINO: On the economy, I have to say, we have a very low risk of recession. We have it at 10% to 15%. We see these problems more as growing pains, not necessarily something that’s going to topple the apple cart for the US. Indeed, we’re looking at how– while inflation is certainly pinching household and businesses budgets and pushing costs up higher, that also when we’re looking at both households and businesses balance sheets are rather healthy. In our analysis, we’ve seen household and business balance sheets looking at the best in basically, in almost in over a decade, so pretty good readings.

We would look at probably the biggest risk we see is inflation. The question of a rapid re-inflation of the environment, something that would cause markets to unwind. That would be the risk that we would see for the US, but we don’t necessarily see that as a long-term risk.

ALEXIS CHRISTOFORIOUS: You know, we’ve got yields now over in the bond market, I think, their highest since the pandemic. We continue to see the flattening of the yield curve, and in the past, that has been a warning sign, a recessionary warning sign. Do you believe it is now? I know you just put the possibility of a recession at 10% to 15%, which I have to say, sounds a little bit high to me for this year. What are your thoughts?

BETH ANN BOVINO: The yield curve has been rather flat for some time. I have to say, though, the yield curve, that signal, it hasn’t been wrong in a very long time, so you have to give it credit where credit is due. However, one of the reasons why we would expect to see that– you’d expect to see that yield curve flatten is partly because there’s two factors. One, of course, the risk of inflation.

But there’s also a question of basically investors putting their money in certain ways and people are, in a sense, somewhat the risk, of course, what’s happening abroad brings money back to the US as well, meaning that the prices are– basically pricing pressure on yields– on, I’m sorry, on bonds and yields push it down as well. So what happens abroad also matters to what happens to that yield curve here.

ALEXIS CHRISTOFORIOUS: All right. Lots to look for here in the new year. Beth Ann Bovino, S&P Global’s Chief economist. Thanks so much for being with us.