The S&P 500 peaked on Jan. 3, 2022 and has dropped about 19% since. Shares of advertising-technology (adtech) company PubMatic (PUBM 1.77%) have been entangled in this bear-market net, falling a whopping 60% during this time.

PubMatic partners with publishers of digital content, including video content, to get ads displayed and generate maximum revenue. Revenue for PubMatic was up 26% in the first half of 2022. And the company’s publisher partners expanded their spending at an impressive rate. This is measured with the net dollar-based retention rate, which was at 130% in the second quarter.

For what it’s worth, the net dollar-based retention rate was 140% in the first quarter of 2022 for PubMatic, indicating that, on average, customers spent 40% more than they had during the previous year.

As macroeconomic fears have increased, spending on advertising has decreased. That makes sense. If consumers’ budgets are increasingly stretched thin from inflation and higher interest rates, then it makes less sense to try to sell them products with ads.

Many adtech players are feeling the heat, including PubMatic. Revenue of $64.5 million in Q3 was only up 11% year over year. And according to management, the drop-off in revenue growth got worse late in the quarter. 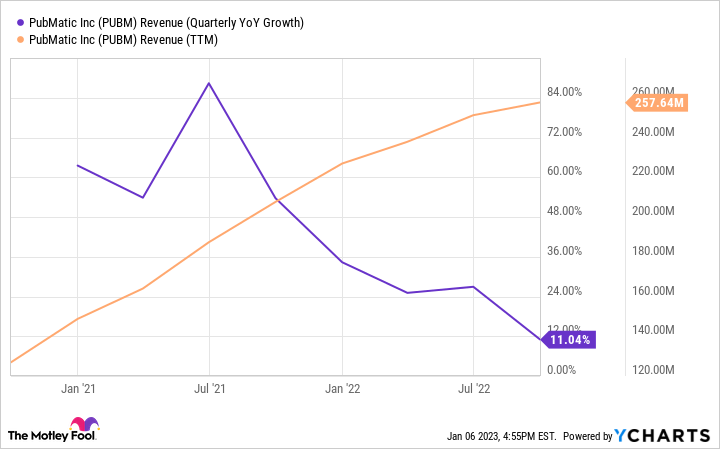 I believe PubMatic’s CEO Rajeev Goel said it best by saying, “Despite the near-term economic pressure, I am confident in the medium to long term outlook for PubMatic.” In other words, Goel feels better about the long term than the near term for this business. It’s an outlook that I agree with.

For Q4, PubMatic is expecting about 1% revenue growth. But during this slowdown, it’s maintaining profitability. It’s earned about $16 million in net income year to date and is guiding for at least adjusted profitability in Q4 as well.

Finally, PubMatic won’t be forced to play the short game because of finances. Its balance sheet is fortified with $166 million in cash, cash equivalents, and marketable securities, and it doesn’t have any debt.

Putting it all together, PubMatic’s business is poised to rebound when the ad market does. And in the meantime, its operations are profitable, and it has a fortress balance sheet, meaning Goel has good reason for confidence in the business’s long-term prospects.