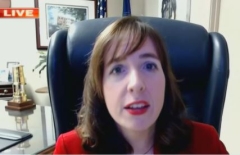 Eleven banks have been put on notice that they will face consequences if they continue their investment boycott of the fossil fuel industry in violation of Kentucky law, State Treasurer Allison Ball says.

“The consequences are serious in Kentucky,” Ball said in an interview with Fox & Friends on Wednesday, discussing her state’s new law pushing back against the investment-discrimination practiced by banks adhering to the liberal Environmental, Social and Governance (ESG) ideology, which prohibits investment in traditional energy sources.

The 11 banks have received a formal warning that, if they don’t stop boycotting fossil fuel investments, Kentucky will stop doing business with them, Ball explained: 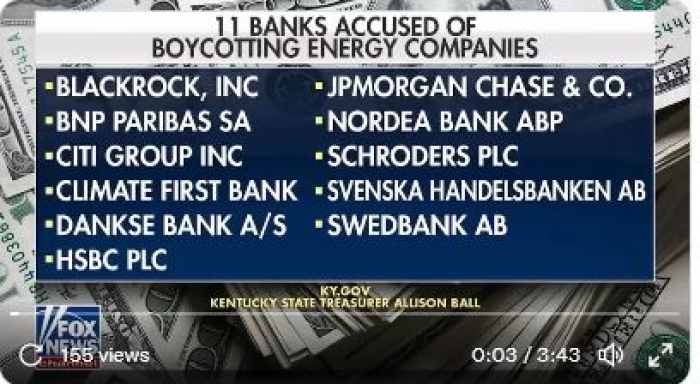 Ball said that she’s “absolutely” certain that the punitive measures are legal:

“This bill was passed last year, and it’s a strong bill. It says, if you are boycotting fossil fuel energy – and, we’re an energy state in Kentucky – if you’re boycotting us, then Kentucky’s not going to do business with you,

“So, the law is clear and the law has tasked me with responsibility to make sure I’m doing what I’m supposed to do on this and we feel confident on this list.”

Denials by the banks in question are nothing more than “double-speak,” Ball said, since the state has thoroughly researched each bank’s behavior and public comments:

“It was clear to us that they are boycotting, some of them very strongly, some of them very explicitly. So, we’ve not been haphazard with this. We have been thorough, we’ve been careful, we’ve been across-the-board same standards for everybody, and every one of these organizations is, in some way, engaging in a fossil fuel boycott, according to Kentucky law.”