Cryptocurrencies have been hot commodities at various times over the past decade when it seemed like their price charts were going to endlessly move up and to the right. But 2022 was not one of those times. Mainstream cryptocurrencies like Bitcoin dropped in value by over 50% in the last year, and some cryptocurrencies, like Shiba Inu, fell over 70%.

Part of the drop can be explained by recent reports of fraud related to FTX Trading and its founders Sam Bankman-Fried and Gary Wang. Some naysayers also like to point out concerns about the industry over currencies that appear to have no underlying business fundamentals, making them next-to-impossible to accurately value.

Putting your hard-earned savings into something that has a lot of hype associated with it didn’t serve investors well in 2021 and it still isn’t in 2023. Rather than taking a chance on the still-unproven crypto industry, investors might want to instead focus on these three ironclad stocks for their portfolio.

Dropbox (DBX 0.27%) was one of the hottest start-ups that came out of Silicon Valley in the early 2010s, even eliciting a famous acquisition offer from Apple founder Steve Jobs. Since then many people have forgotten about the file storage and workplace management software company, and its stock price now hovers about 20% below the IPO price set in 2018.

The stock may be down, but the business has done just fine in that time, setting up a great buying opportunity for long-term investors. Last quarter, Dropbox’s paying users hit 17.55 million, up from 12.3 million in the same period in 2018, with average revenue per user (ARPU) going from $118.60 to $134.31 over that same time frame. This is a recipe for steady top-line growth, which Dropbox has exhibited since going public. Last quarter, annual recurring revenue (ARR) hit $2.4 billion.

Dropbox is also highly profitable, generating $736.4 million in free cash flow over the last 12 months. By 2024, management has a goal of hitting $1 billion in annual free cash flow. At a current market cap of $8 billion, that gives the stock a trailing price-to-free-cash-flow (P/FCF) ratio of 11 and a forward P/FCF ratio of 8 based on its 2024 guidance. For a business with recurring revenue and consistent growth, Dropbox looks like a steal at these prices.

2. Alphabet: A monopoly in search engines

Moving to a much larger business, let’s look at Alphabet (GOOG 1.60%) (GOOGL 1.32%), the technology giant that owns Google, YouTube, Waymo, and other properties. The majority of this business is still driven by Google Search, which generated $39.5 billion in revenue last quarter, 57% of Alphabet’s overall sales. Over the last 12 months, the business generated $78.5 billion in operating income, a number that is up 400% in the last 10 years and the key driver of Alphabet’s stock performance over that time frame.

Going forward, more and more of Alphabet’s long-term growth will likely be driven by the much younger YouTube and Google Cloud businesses. Both segments produce less than $10 billion in quarterly revenue (which is small for Alphabet) but have put up impressive growth rates in the past few years. And don’t forget Waymo, Alphabet’s autonomous driving unit, which is the leader in the fast-growing industry. The subsidiary’s taxi service has only launched in a couple of markets around the United States and contributes very little to the company’s consolidated financials right now. Yet it has big potential if it can go global with an autonomous taxi network. 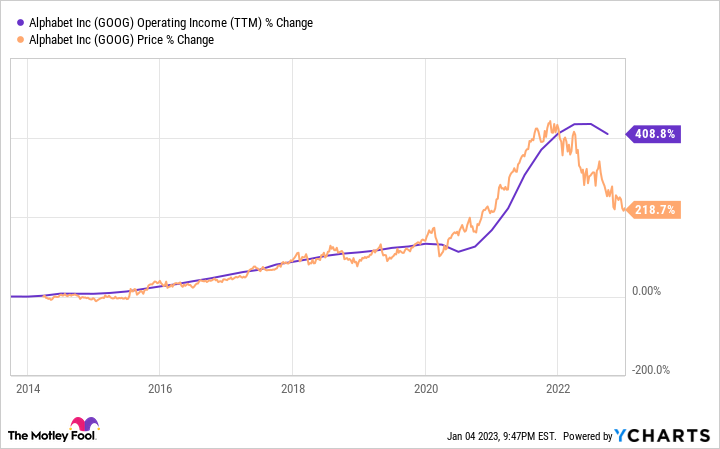 With a dominant position in the search market and plenty of smaller businesses growing quickly, Alphabet looks like a perfect stock for investors looking for diversified growth over the long haul.

3. Altria Group: For those comfortable with tobacco companies

For those who are interested in tobacco stocks, Altria Group (MO 2.38%) is a great dividend stock to put in your portfolio.

The company is the owner of Philip Morris, which itself sells the popular Marlboro cigarettes brand in the U.S. Altria Group (and all its other former corporate names) is one of the best-performing stocks of all time. The company managed to deliver an average 17.7% total annual return from 1926 through 2016. That is the magic of compound interest and steady industry profits. 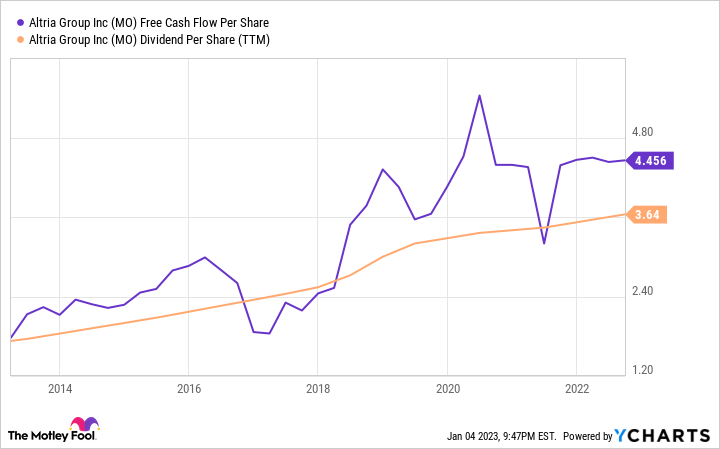 Admittedly, Altria has not generated total returns at those high levels since 2016. Altria Group is currently a low-growth stock that rewards investors now mostly through dividends, paying out the majority of its earnings to shareholders. Over the last 12 months, its dividend per share was $3.64 (currently yielding 8.3%), which is slightly less than the $4.46 in free cash flow it generated per share. This is the opposite of a worthless cryptocurrency, with Altria’s returns driven by consistent earnings power that grows year after year and continues to fund that large dividend.

Altria Group does have one problem though, and that is declining cigarette volumes across the United States (its main geography). To counteract this, the company has invested heavily in less harmful products like nicotine pouches, cannabis, and vaping. Some of these haven’t worked out, but shareholders should be pleased that management has a long-term view for this business. At a super high dividend yield of 8.3%, investors stand to benefit from having Altria Group shares in their portfolios over the next decade.