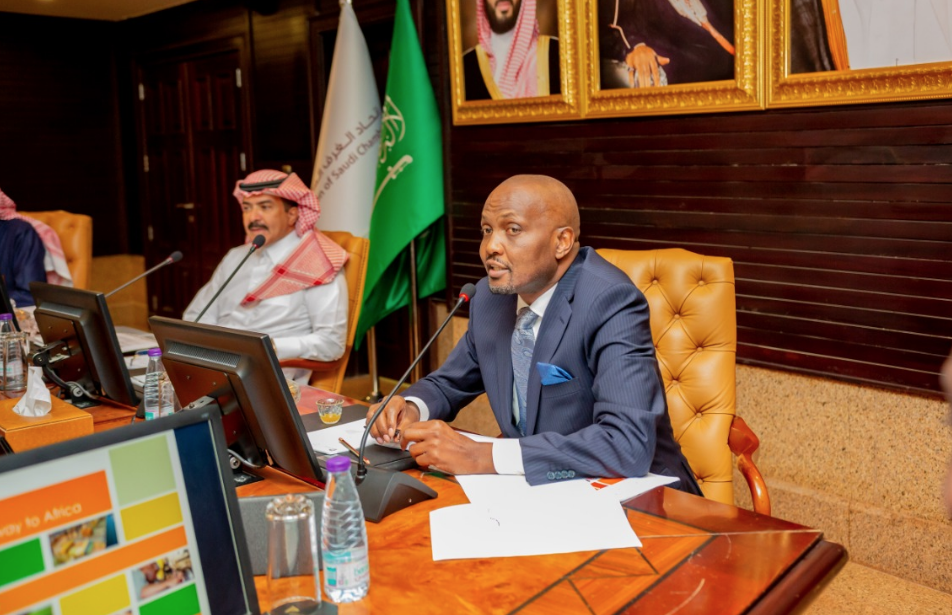 Kenya is not a slave to trade to any country and would not allow its resources to be exploited in the US-Chinese trade war.

Addressing media in Saudi Arabia where he has pitched a tent in recent weeks, Cabinet Secretary Trade and Industry, Moses Kuria said Kenya and indeed Africa are looking for an equal economic partner regardless of political ideologies.

Commenting on the US-Chinese race to acquire investment shares in African economic resources, Kuria stressed that African countries, including Kenya, have economic and investment relations with both Washington and Beijing, as is the case with other states in the world.

According to him, Washington’s prioritisation of Africa in its policies, as seen in the recent American-African summit, was built on the huge natural and human potential available in the African Continent.

He added that China also found important economic and investment opportunities in African countries, expecting many Chinese companies to enter African markets with the aim to increase investments in the continent.

“There are no limits to African cooperation with China and America. Africa’s interest requires dealing with everyone without subjecting its will to one party at the expense of another”.

Kuria said that the world should deal with African countries according to the developments of the stage, as the continent is no longer just a bloc occupied by crises and diseases.

The world has finally discovered that Africa is very rich economically and enjoys great, diversified and vital investment opportunities thanks to its vast fertile lands and abundant water suitable for the largest agricultural and food production in the world, he underlined.

Kuria pledged to strengthen economic ties with Saudi Arabia by reviving axes of cooperation, adding that his recent visits to the gulf country culminated in the signing of two vital bilateral agreements.

“In my discussions with the Saudis, I found vital ways to better bridge cooperation between the two countries, and we agreed to increase trade exchange, which amounts to $1.5 billion (Sh185 billion),” Kuria said.

The two agreements include the establishment of a joint business council and an e-commerce platform.

“Two agreements were signed to stimulate trade and launch commercial zones between a number of regions of the Kingdom in Riyadh, Jeddah and Dammam,” Kuria said.

Kenya’s imports from the UAE were valued at Sh178.5 billion in 2021, up from Sh92.2 billion the previous year, the Kenya Economic Survey 2022, by the Kenyan National Bureau of Statistics, indicates.

Expenditure on imported motor spirit premium, gas oil and other refined petroleum products from the UAE rose from Sh59.5 billion in 2020 to Sh141.1 billion in 2020, resulting in a 93.5 per cent increase in total import expenditure from this source,” KNBS says in its annual report.

He said that Kenya will market Saudi products, such as petrochemicals and fertilizers to Kenya and Africa’s 1.3 billion population by extension

According to Kuria, there is a virgin of great opportunities and new areas for qualitative cooperation between the two countries, adding that the logistics services center in Mombasa is one of the most important achievements of the Saudi-Kenyan agreements.

The Kenyan trade chief met with the Saudi business sector at the headquarters of the Federation of Saudi Chambers, where he discussed a series of proposals to strengthen and develop his country’s economic ties with the Kingdom.

Those include the establishment of a joint business council, an e-commerce platform, an economic cooperation committee, and incentives for Saudi companies to invest in special economic zones, infrastructure and energy projects in Kenya.

Saudi Arabia has funded 13 projects and development programmes in the transportation, communications, energy, agriculture, health and water sectors since 1978 estimated at $163 million (at least Sh20 billion).

He emphasized the most important challenges facing the private sector with regard to the implementation of technical regulations and standards and obtaining a certificate of conformity and a quality mark.