After last year’s downturn, investors are hoping the market will move in a different direction in 2023. But lingering economic troubles and the possibility of a recession could prevent that from happening. Even if we do experience another down year, one thing is certain: A bull market will come eventually. It might not be this year, but bull markets have always followed downturns while lasting longer on average.

Preparing for an inevitable bull run means buying shares of companies that can ride said run and deliver superior returns for a long time. In that spirit, here are two excellent candidates in the e-commerce industry: Etsy (ETSY 2.64%) and MercadoLibre (MELI 4.89%).

Etsy is an e-commerce specialist focusing on offering vintage, handmade, and rare goods, a high-growth niche of the industry in which it has become a leader. The company encountered issues last year as people spent less, presumably not prioritizing the kinds of expensive goods found on Etsy’s platform. As such, the Etsy’s stock is down 34% over the past 12 months.

But zooming out helps. Etsy’s stock is up by 482% over the past five years as of this writing. In that time, the company has grown its quarterly and annual revenue at a good clip, and its platform has gained in popularity with more buyers and sellers joining in. 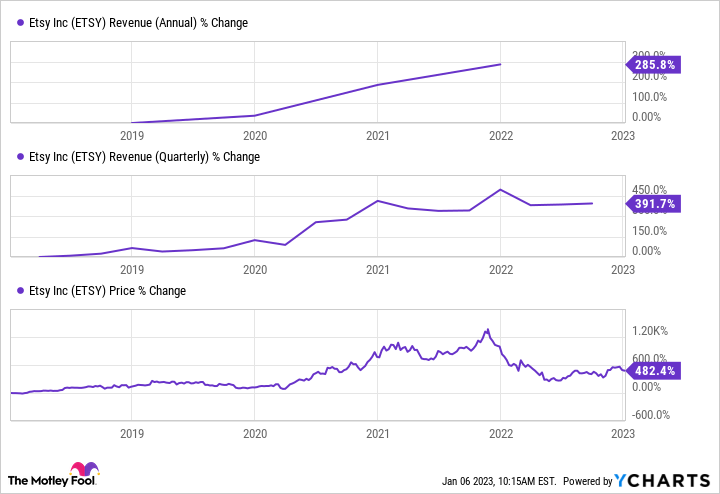 The lesson is that investors shouldn’t rely on one year’s worth of data when deciding whether to buy Etsy’s shares.

While the company’s revenue growth declined substantially last year, this is an anomaly easily explained by the difficult economic conditions and the challenging year-over-year comparisons it faced since its business soared abnormally during the first two pandemic years (or so). Once those trends reverse, expect Etsy to rebound massively.

Here is why. First, the value of the company’s platform increases as more people use it — since more sellers looking for vintage goods will attract more buyers, and vice versa — granting it a network effect and making it hard for competitors to knock Etsy off its pedestal. Second, Etsy will ride the wave of the e-commerce industry, which still has miles of growth left ahead.

Retail transactions will continue to switch to online platforms for many years, driven by increased internet penetration worldwide and the benefits of doing business online for both individuals and businesses.

For consumers, e-commerce is more convenient. It also allows companies to reach much broader potential client bases. Etsy’s niche of the sector is worth $2 trillion, according to the company’s estimates. It has barely started to make headway within this space. The many opportunities at its disposal make Etsy an extremely appealing stock for growth-oriented investors.

MercadoLibre is the leading e-commerce platform in South America. It’s sometimes called “the Amazon of Latin America,” and that title is well deserved, although MercadoLibre offers a suite of services, some of which its counterpart doesn’t. The company has a fintech arm (Mercado Pago), it helps merchants set up online storefronts through Mercado Shops, and it has a logistics solutions operation dubbed Mercado Envios.

MercadoLibre has built a competitive advantage from multiple sources. First, it set up deep roots in the South American market. Creating an e-commerce platform that can deliver packages to people’s doorsteps in 18 different countries requires getting thousands of merchants on board, and the time and money needed to build the infrastructure necessary to support such an operation. Having already done this step grants MercadoLibre an advantage.

The company’s platform also benefits from the network effect. MercadoLibre has been a victim of the marketwide troubles that have dragged down many companies. But its financial results remain strong. The company’s revenue increased by 44.8% in the third quarter to $2.7 billion.

That is well within the mid-range of top-line growth rates investors have gotten accustomed to with MercadoLibre, and it is even more impressive considering that currency exchange dynamics took a big chunk out of the company’s sales. 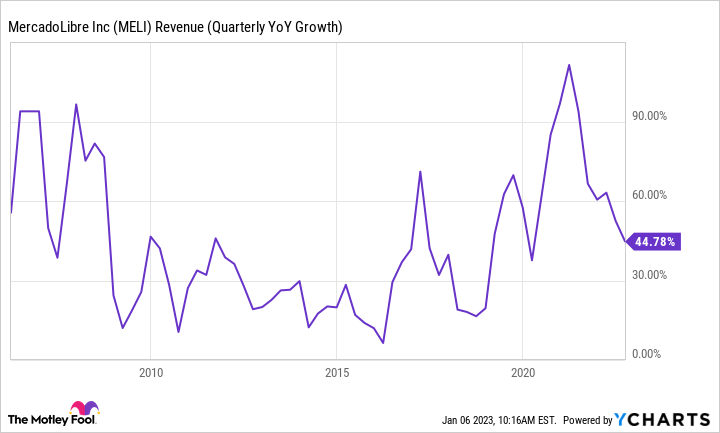 MercadoLibre’s revenue grew by 60.6% on an operational basis. The company’s net income for the quarter came in at $129 million, higher than the $95 million reported in the year-ago period. If MercadoLibre can continue performing well even in a down economy, imagine what the company can do once things recover.

And, importantly, MercadoLibre’s long-term prospects won’t be halted by economic cycles, as the company is well positioned to profit from long-term trends that will favor e-commerce growth. Thanks to a solid position in a vast South American market and an impregnable moat, MercadoLibre is worth holding onto for a long time.