Las year was a disheartening one for Amazon (AMZN -0.76%) and Tesla (TSLA -4.65%) shareholders. Both stocks were down 45% or worse in 2022 as the air came out of the 2020-2021 market bubble. Investors are concerned about Amazon’s current lack of profitability and a potential slowdown in e-commerce sales, while Tesla investors are worried about intensified electric vehicle (EV) competitors and Elon Musk’s Twitter acquisition.

Amazon and Tesla’s returns were both down significantly in 2022, but I think that is set to change in 2023. Here are three reasons why Amazon’s returns will outpace Tesla’s in 2023. 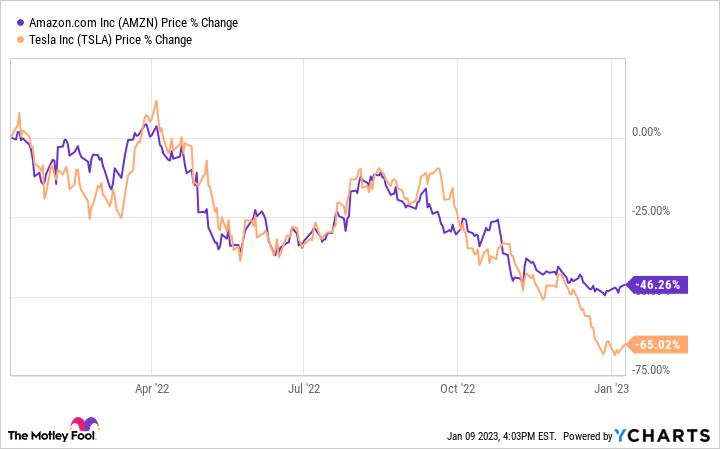 1. Amazon has a better outlook

Amazon is a vast technology giant, and many people know it for its flagship e-commerce business. But its most important segment is now Amazon Web Services (AWS), the leading cloud computing infrastructure provider around the globe. Over the last 12 months, AWS generated $76.5 billion in revenue and $23 billion in operating income and maintains an estimated 32% share of the cloud computing market.

AWS has been growing quickly even at this massive scale (up 34% year over year for the past 12 months), but there are no signs this will slow down anytime soon. Last quarter, executives told investors that the subsidiary has a backlog of $104 billion, which was up 57% year over year. There are still tons of companies that are switching over their IT infrastructure to the cloud, and a lot of them are choosing AWS to meet their needs.

Tesla’s most important business line is selling electric vehicles. With that in mind, recent trends in its order backlog should worry investors. According to third-party analysts, Tesla’s backlog went from 476,000 vehicles in July to only 190,000 at the end of November. For a company that is ramping up its production capacity and trying to be the leader in the transition to EVs, this is not a good sign for growth in 2023.

2. A flipping of profit margins?

If you just looked at the trailing price-to-earnings ratios (P/E) of both Amazon and Tesla, you’d think Tesla was the better stock to buy. But making investments is not about the past, it is about what will happen in the future. And I think Amazon’s future profit potential looks bright. First, within the e-commerce division (which has been the biggest margin headwind), Amazon is growing its high-margin advertising revenue by 30% year over year. Second, management just announced it’s laying off 18,000 employees after overhiring in 2021 and early 2022, which should save billions of dollars a year in expenses. AWS, which makes up a larger chunk of this business every year, has an operating margin north of 25%. 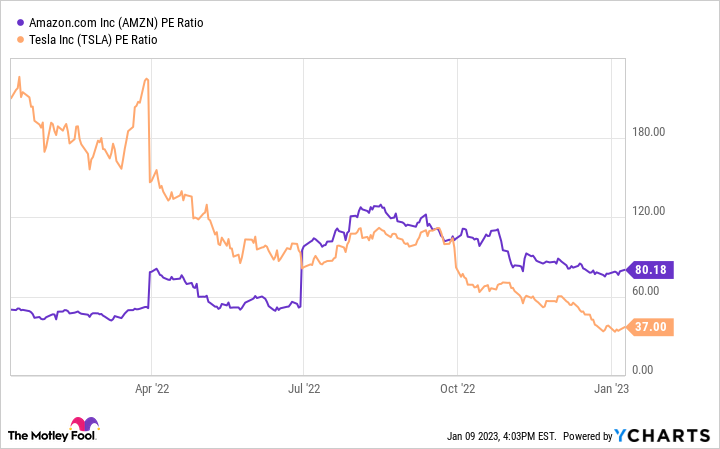 On the flip side, there are signs that Tesla’s profit margin will compress in 2023. The company has made repeated price cuts in North America and China in recent months and it’s going to feel the impact of rising prices for its commodity inputs like copper and lithium. Getting hit by rising input costs and lower selling prices is a recipe for declining margins, no matter how strong your brand value is.

Lastly, I think there is one vital reason why Amazon is set up to succeed over Tesla: structural competitive advantages. Within e-commerce, Amazon is extremely hard to compete with due to the tens of billions of dollars it has invested in fulfillment, logistics, and delivery infrastructure, which no company in North America has matched. With the cloud, it has economies of scale, allowing it to offer lower prices than other cloud providers.

Tesla, on the other hand, operates in the hypercompetitive EV market, with no differentiation besides its brand. There are dozens of automotive manufacturers — many with larger capital bases than Tesla — scaling up their EV production right now. Through 2023 and beyond, this will create new challenges for Tesla as it tries to separate itself from the pack — challenges it did not have to face over the previous five years when it was the only scaled EV manufacturer outside of China.

Add up all these factors, and I think it is pretty clear why Amazon is a better bet than Tesla for your portfolio in 2023.